Is There a Better Way to Manage Knowledge Workers? 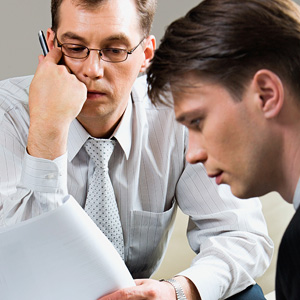 Is there a better way to manage knowledge workers?

Is there a better way to manage knowledge workers?

His suggestion is that the essence of what a knowledge worker does is project work. As such, the knowledge worker is faced with peaks and valleys that mirror what’s happening with a particular project, rather than having a consistent set of tasks and activities to complete.

What tends to happen with knowledge workers is that they are either completely swamped and struggling to keep up with what’s on their plate … or they have nothing much to do. There tends not to be a lot of in-between.

Which leads to the question of whether or not there might be a better way to structure and manage your knowledge workers.

Here’s an excerpt from the article:

“Companies everywhere struggle with the management of knowledge workers. They compete fiercely to find and retain the best talent, often accumulating thousands of managers in the process. For a while this is fine, but inevitably, usually when economic conditions turn less favorable, they realize that these expensive workers are not as productive as hoped, and in an effort to manage costs they lay off a large swath of them. Soon after, though, they’re out recruiting again.

This cycle is highly destructive. Aside from the human and social costs involved, it is extremely inefficient for a company to manage any resource this way, let alone one that is widely recognized as the engine of growth in the modern age. What’s especially puzzling is that the companies that engage in this cycle include some of America’s most revered role models. General Electric, for example, conducted extensive management layoffs in the 1980s and early 1990s. After a gradual regrowth in its ranks, the company announced another round of layoffs in 2001. By 2007 the numbers were back up again—until the recession forced cuts once more. Colgate-Palmolive, MetLife, Hewlett-Packard, and PepsiCo, among others, have all recently gone through the same process.

Why do these companies struggle so much with what ought to be their most productive assets? The answer, I think, is rooted in a profound misunderstanding—despite decades of research and debate about the knowledge economy—of how knowledge work does and does not differ from the manual work we have come to understand so well.”

Is it time for a new strategy to manage knowledge workers?

After reading the article, what’s your opinion? Is your organization handcuffed with a structure that implies it’s a Decision Factory? If so, what do you propose to do about it?